The story starts with Omar working in the pits, conversing with his workmates and siphoning gold, when suddenly they hear a shout. Omar’s brother, Pablo, had been crushed by one of the uneven walls of the pit that had collapsed, and was killed immediately. The story then flashes forward a month later, where Omar is struggling to continue work, knowing his brother died so close by. He takes a trip into the deeper part of the rainforest and thinks about everything on his mind. 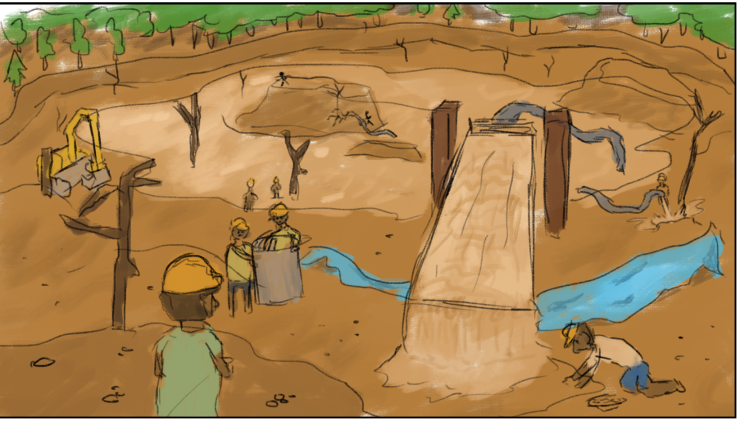 This is when he is approached by a red howler monkey, who calls to him from atop one of the branches. This startles Omar, as he can understand the monkey, who begs him to help, as his brother went missing days ago, and it is rumoured that a human took him. Sympathising, Omar agrees, and this is where the first mission starts. 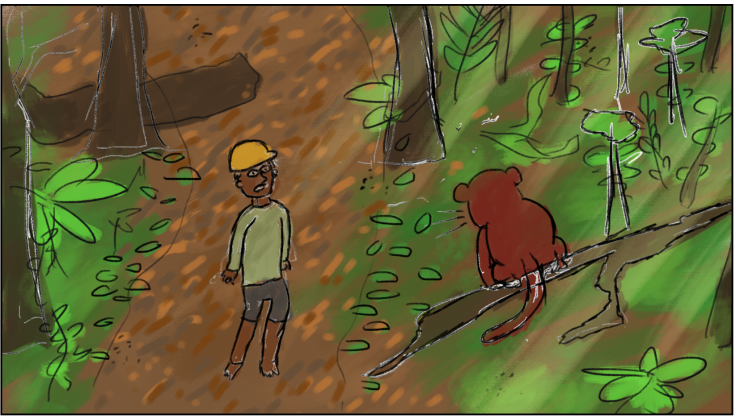 My game idea in its current state has 4 missions in total. If it ended up being made, there’s no way there would be time to realise all the stories I want to tell. Even 4 might be too much, but I think it’s the minimum amount of missions needed to tell a good story.

MISSION 1 – THE MONKEY AND THE CAGE:

This is the only mission that has any kind of work created for it; before fully iterating the mission, I had already come up with concept art, a prototype involving the mission, and a digital drawing of the monkey. This mission acts as a sort of tutorial for the player. After a lead directs you to the nearby town, you must ask around to locate where the monkey is. After finding it, the owner of the building comes in by surprise and interrogates you. By either finding out through other people that he is actually an illegal animal trader (KNOWLEDGE OPTION) or by picking up a bat and threatening him (ITEM OPTION), you can get out with the monkey and complete the mission. If you try and save the monkey without the use of these options, you will fail, as the character is not informed. It doesn’t matter if the player fails, as the instance will just restart, and in many cases that will happen. This is intended, as it forces the player to look around and see if they can figure out what to do, without the use of signposts. This mission introduces many more characters, and has a more expansive area for the player to explore. The human issue for this mission is deforestation: a brown three-toed sloth complains that the tree hosting his favourite branch has been chopped down, and asks that you find him a branch with the exact same shape. Because the sloth is so slow, he tells you to go ahead. You don’t see him for the rest of the mission.

When you find the branch, a harpy eagle is resting there, a predator at the top of his food chain. He refuses to budge, and if you ask him to move for the sloth, this only encourages him to hunt him down, and you fail! To make him move, you must enquire by some mouse opossum, all called Maverick, who say they will help distract the eagle if you bring them each a lucama fruit. This takes you on a hunt to find the lucama fruit, and lets you explore a large area, with optional interactions and varied environments along the way. (ITEM OPTION) Once you find them the fruit, they go and run past the eagle, who chases after them. Once this is done, the sloth returns and commends you for your great work.

MISSION 3 – LOVE BY THE LAKE

By far the mission with the most characters! This mission tackles the issues of endangered species. Due to human activity, the giant river otter has a low population, and you are alerted to a situation! You find Gabriel, a young male who his family says is ready to leave the area and find a mate. But he is too scared to do it alone, so asks you if you would accommodate him. You find out that Gabriel isn’t exactly the most skillful, as his parents have tried to protect him from the outside world, and thus haven’t prepared him. You visit an oxbow lake, the giant river otter’s preferred habitat, to try and find someone. Once you have explored the area, you come across a female called Gina, who is with her family. She seems attracted to Gabriel, but her family are not convinced! Her father, mother and grandfather all want proof that Gabriel is capable of being a suitable partner, and they all want to see different qualities!

The father wants to see that he can hunt, so asks him to catch a fish. Gabriel needs your help though! He stands by the lake and waits for fish to swim past; it’s your job to give the command for when he should swipe for the fish! With the right timing, the fish is added to your inventory, and you can convince the father that Gabriel is worthy. (ITEM OPTION)

Next, the mother wants to know that Gabriel understands the basics of being a good partner. This one is easy, and only requires choosing the correct standard answer to proceed.

The grandfather requires Gabriel to know all about the outside world, as there are plenty of dangers out there. Gabriel knows nothing, so you must ask Gina’s younger siblings for information, who were just recently taught the dangers that the grandfather wishes to know about! Using the knowledge, you convince the last of the family members, and Gabriel and Gina are free to run away together! (KNOWLEDGE OPTION) 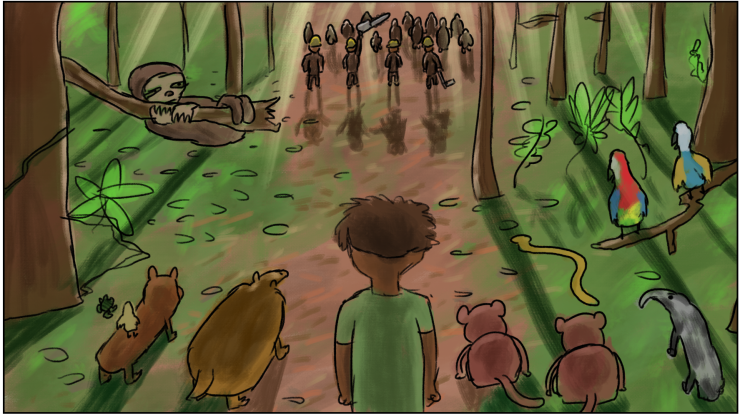 Now that you are familiar with a lot of the animals, you would do basically anything for them, including betraying your own kind so that they can live! When it comes to your attention that many of the river life are dead due to mercury poisoning, it fills you with horror! You know that is the fault of the gold-miners, who use it for the extraction process of gold. You march straight towards the pits without thinking, and Renzo, the monkey you saved, joins you. The workers are surprised to see you, and even more surprised when you try and leave with the mercury! They surround you, and your only option is to attack with Renzo and make a break for it! You manage to get away, but they announce they will invade the rainforest and take it back!

The last mission is about twice the size of the other missions; the first part is quite linear and story based, but when the miners attack, you have to deal with the most challenging task yet!

The miners come in waves. Whenever a group comes along to attack, you must assemble the animals you have befriended to defend the rainforest! This still uses the same mechanics as previously; you must pick an animal, who has one knowledge and item dialogue response each. By pairing the correct answers with the corresponding situation, you can drive the gold miners away! The animals you can use are the two monkeys, the two otters, the sloth, and the mouse opossum. By completing four of these waves, you win, but get them wrong and you have to restart! While I have not fleshed these knowledge and item options out, I know that it will end with the gold miners leaving, and never returning to that area! Omar reflects on his journey, where he started and where he ended up, and feels happy. He knew his brother would be proud of him. THE END

Here are some extra character examples, including Omar and an enemy gold miner. Due to time restraints, I was not able to give all of these characters a mission.